Unfortunately, as I have not updated the news section recently there is inevitably a long list of obituaries from amongst those people who were contemporaries of Florence Mills.  But first,  the good news before going on to the  obituaries.

*Well-known film and TV actress, and Florence Mills devotee, Jonelle Allen presented a segment from her new Florence Mills tribute show "In Search of a Blackbird" at the NoHo Arts Festival on May 14 & 15.  Director Anthony Barnao reports:
"We did three performances of a twenty five-minute segment of "In Search of a Blackbird" for the NoHo Arts Festival this weekend. Jonelle and her co-star brought them to their feet all times. We definitely have something."
Hopefully the full show will go on to wider audiences in the near future.

*The foreshadowed Adelaide Hall biography by Iain Cameron Williams is now a reality and details can be seen at: Underneath a Harlem Moon: The Harlem to Paris Years of Adelaide Hall  The book provides a comprehensive coverage of Adelaide's life up to 1938.

*A new book by Stephen Bourne on the life and career of Elisabeth Welch (sadly also covered in "Obituaries" below) will be published by Scarecrow Press on May 28:

Stephen also advises that he is now working on a book about the career and films of Ethel Waters.

Dr. Joseph Wiltshire
The last surviving nephew of Florence Mills, son of Florence's sister Olivia, died after a long illness on 1 March 2005 in his home town of Lake Wales, Florida. He had a distinguished career as a local doctor, as well as being socially active. Described as
" one of the very few doctors who would knock on doors and would come at night if you called him. He was the only African-American who was named Citizen of the Year,"
He has had a street in the town renamed in his honor.

Elisabeth Welch
One of the last surviving performers from Florence's era and a true admirer of Florence, Elisabeth Welch introduced the Charleston in the 1923 show Runnin' Wild and was in Blackbirds of 1928. She had a long distinguished career in English show-biz and films, which will be commemorated in Stephen Bourne's forthcoming book (see above). She died on July 15, 2003.

Hyacinth Curtis
was a member of the cast of Florence's show in France, Belgium and England in 1926 and was a Cotton Club girl for many years later. Her clear memories of her show business days was an inspirational help to me in writing the book. She died aged 102 on 28 May 2004.
Louis Simms
A close friend of Hyacinth Curtis who, as a child star, saw Florence perform, and was later a member of the celebrated Copasetics dance group. Died in recent years in his late 80s or early 90s

Henry Whitehead (the link gives a sense of Henry's love of history)
A passionate historian of the DC area, Henry contributed to the making of the documentary Duke Ellington's Washington  Henry supplied the photos in Ben's Chili Bowl  of the old Minnehaha Theatre that  originally occupied the site of Ben's. I recall with great pleasure his taking me on a personal tour of Duke's Washington and then placing the contents of his black showbiz scrapbooks at my disposal. He was a friend of Florence's co-performer Aida Ward in her later life, and a passionate advocate of the need to preserve the Howard Theatre. Henry died aged 85 on 8 January 2002.

Leonard Reed
The co-inventor of the Shim Sham Shimmy dance, Leonard Reed was one of the very few surviving people who had seen Florence Mills perform. He was a friendly, warm person who was happy to talk to me about Florence Mills and his friend Maude Russell. He died April 10, 2004 aged 97.

The Queen Mother
Died March 30, 2002, aged 101. As lady Elizabeth Bowes-Lyon the late queen mother saw Florence Mills perform many times in London. She expressed her appreciation in the following message to me signed on her behalf by a Lady-in-Waiting: 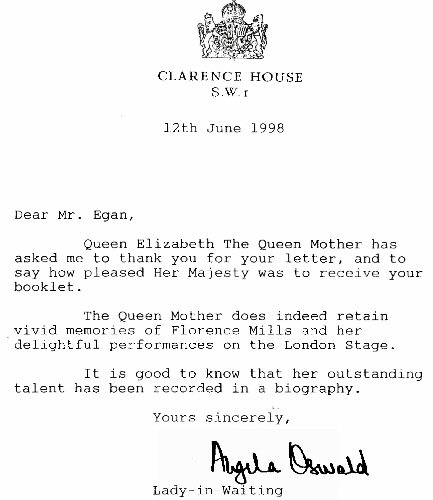 *Other recent deaths
While people who knew Florence Mills or saw her perform were necessarily of an advanced age today, there have been some recent sad deaths at an early age, of people who were part of her tradition and understood her world, including: