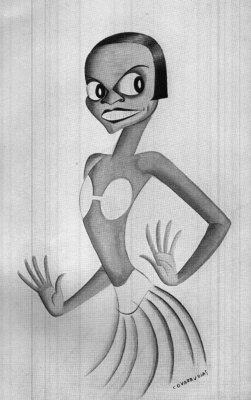 From: The Prince of Wales and other Famous Americans by Miguel Covarrubias (Alfred a Knopf,  New York, 1924)

The Harlem Renaissance was a magnificent flowering of literary and artistic creativity by African Americans based in Harlem in the Twenties and Thirties.  Various start and finish dates are quoted, anywhere from the teen years to the late Thirties. Shuffle Along (1921) has been seen by many as its start, while the Great Depression (1929)  signaled the beginning of the end, so the Twenties were certainly the hey-day of the Renaissance.  During that time Harlem was a magnet for artists and connoisseurs world wide

Florence Mills was a figure of major importance in the Harlem Renaissance.  Most of the scholarly texts dealing with the period give little indication of this as they tend to focus on the literary highlights and ignore the musicians and entertainers.  The contemporary intellectual leaders of the Renaissance (with  notable exceptions in Langston Hughes and  James Weldon Johnson ) looked to the European models of high culture (classical music, the Western Canon) to earn respect for black Americans artists, overlooking the rich resources of their own black culture.  "The Harlem Renaissance has been treated primarily as a literary movement, with occasional asides, contributed as musical spice, about the jazz age and the performances of concert artists." Samuel A. Floyd Jr. Black Music in the Harlem Renaissance (Greenwood Press, New York, 1990)

I dealt with this topic at some length in a paper I presented to the conference "A Tribute to William Grant Still", held at Northern Arizona University, Flagstaff Arizona, June 24 - 28, 1998. The text of this paper can be read by clicking here: Levee Land, William Grant Still and Florence Mills.  The content of the paper has been incorporated into my book in chapters Seven and Eight.

While it was noted above that the literature of the Renaissance has been lacking in recognition of Florence's role, the Internet content related to it is more generous, frequently noting her presence.  The following links are a sampling of the rich material available out there. Going through them will lead to many others (Web sites and names change frequently.  I will try to keep this list up-to-date)