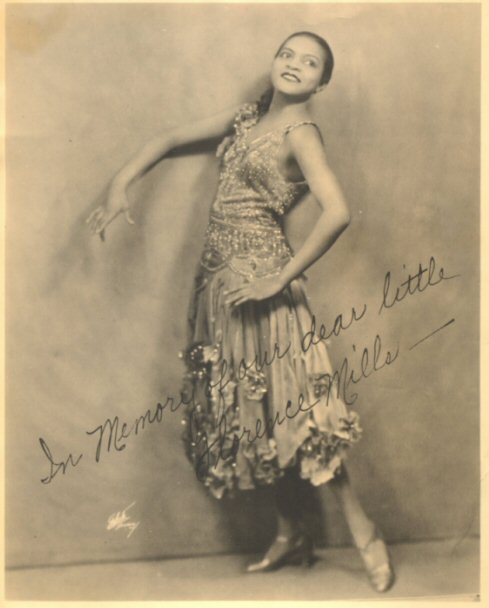 The most significant ongoing commemoration of Florence is the annual

My friend Ron, "The Artivist", owner of  W.E.A.L.L.B.E. Blogspot radio, has created a 3-Part tribute to Florence Mills on YouTube, which can be seen from the links below (Note: the dancer in the film clips is the wonderful Nina Mae McKinney, not Florence Mills):

Florence Mills The Blackbird Of Harlem Part One

For other commemorative material follow these links  or scroll down

Duke Ellington's "Black Beauty" was the most significant piece of music written for Florence after her death. It inspired my book on Florence and this web site. The full story of that connection is told in an article I wrote for TDES Newsletter called "Duke, Black Beauty, Florence and Me". When Ellington presented his historic 1943 Carnegie Hall concert he was very conscious of his role as a cultural representative of African American society.  The showpiece of the concert was his extended piece Black, Brown and Beige: a Tone Parallel to the History of the Negro in America. However, he also presented three 'Portraits' of the performers of his race he admired most - Bert Williams, Bojangles and Florence Mills.  His Portrait of Florence Mills was the 1928 piece Black Beauty, widely believed to have been written as his tribute shortly after her death.  Black Beauty, in the many versions over the years by Ellington, and many others, has been the single biggest factor in keeping Florence's memory alive. It has always been considered one of Duke's finest compositions, an early sign of the depth of his talent.  My personal favorite version, and the one that originally inspired my research into Florence Mills' life and my book on her, is the one from  26 March 1928. It captures the jaunty vitality of the dynamic young dancer as well as the wistfulness at her early passing:

There have been many recordings of Black Beauty over the years since 1928, by Ellington and many others - 64 are listed on Lord's Jazz Discography CD and more being made recently by groups like Pierre Dorge's New Jungle Orchestra from Denmark. A few favorites of mine are:

English classical composer Constant Lambert was an adoring fan of Florence Mills. He saw her in London for the first time in 1923 when he was a precocious emerging musical genius, and his friend Angus Morrison said:

Without a doubt this performance was one of the key experiences in his life, beginning not only his long preoccupation with jazz and the possibility of fusing and blending many of its rhythmic inventions and subtleties into the texture of more serious music, but also moving him in a far deeper way emotionally than any other music he had hitherto heard. I am convinced that the first time he saw the Plantation [Orchestra] was a moment of true inspiration — a moment he sought to recapture over and over again in his own music. The other strong impression made on him by the performance, exerting an influence more all-embracing and with even deeper emotional repercussions, was the incomparable personality of Florence Mills herself

Lambert himself said that his major masterpiece Rio Grande was an attempt to capture what he felt on seeing Florence in her two London shows. When she died he expressed his sorrow in the hauntingly melancholic "Elegiac Blues":

In the aftermath of Florence's death there was a flood of tearful recorded tributes by her grief-stricken contemporaries. Though typically soulful laments of little  musical value (except perhaps the Fats Waller one that was deleted without being issued

) some of them have a sentimental appeal because of their obvious sincerity, or because of who recorded them. They are also a proof of the depth of community feeling over Florence's death. Here are some of the most appealing:

As with recordings, Florence's death brought a flood of poetry at the time, though most of it was rather amateurish. The best is a recent one by  Colleen J. McElroy,  Professor of Literature and the author of "A Charleston for Florence Mills,"  a beautiful tribute poem to Florence's memory. It's in her collection "Travelling Music", StoryLine Press (Ashland, OR). Other excellent writings by her are listed on her web site above.  The tribute to Florence is  reproduced here by kind permission of Professor McElroy herself.

A Charleston for Florence Mills

the toast of Paris, but Florence

just shimmied out of the blasé slouch

held by Broadway queens from cabarets

on Dover St. and straight down to Dixie

of limelight and Florence dancing knock-

knees and flying legs as if nickel

subways would end that day - and they did

a little Blackbird waiting for a Bluebird too

and satin garters popped for the hardluck '20s

and kicks that mimicked slaves, Florence out

dancing for the Prince of Wales, 20 times some

said in that certain age when darktown shuffle

was de rigueur for matrons of the dark tower

yes, all the vogue was jazz for Baby Florence

with her circles and shakes and feet skipping

danced with a flame too brightly held but some

with a smile so wide it hurts still

The following short item was reported as having been written years before Florence's death, on seeing her in Kansas City with the Tennessee Ten, probably around 1920.

A voice pure - clear
Like bell tones near
Or brooklet's joyful tinkling tear,
She sings to life
Then pain and strife
Fade out, her song with joy's so rife.
T

One of the most interesting poems didn't appear until 1931 though it was reportedly written on the day of her funeral. It appeared in the only issue ever of a quarterly literary magazine called American Autopsy. The White editor of the magazine, Harold Hersey, is best remembered today as the king of “gangster pulp” publishers and may be the author of the poem, though it appears to have been written from a Black perspective. Here it is:

Down at the bottom of the cellar stairs
Jazzbo’s comin’ on God unawares,
Muted horn and saxophone,
Berlin dreamin’ over ivory keys:
"All alone at the telephone."
Thompson prayin’ on bended knees.
Harlem, Harlem’s all in white . . .
"You gotta see mama every night
Or you can’t see mama at all."
Sheiks and shebas movin’ slow;
Black and tans a-talkin’ low:
"Yo po’ fays don’t hand around
They done put Florence underground
In a coffin lined with silk.
She’s struttin’ now where her yaller skin
Ain’t no reason not to let her in,
Ain’t no reason,
Ain’t no reason,
And it ain’t no sin."

A jazzbo taps his lacquered cane
For a fay is hummin’ "Charmaine, Charmaine,"
While another’s mumblin’
"A little green cottage,
A little green cottage,
At the end of Honeymoon Lane."
‘Cause Harlem, Harlem’s all in white
With mourners shufflin’ in a yaller night
Apartment houses where the fay goes in
Is silent ‘cept for the scrapin’ feet
Of white folk sneakin’ back to the street
Meetin’ Jesus unawares
Good Lord Jesus,
Good Lord Jesus,
Forgivin’ ‘em all on the golden stairs.

They’s a mighty good reason now to pray.
Black and tan and sneakin’ fay
Her slender feet won’t twinkle for yo’
Never no mo’ like they used to do,
Never no mo’
Never no mo’
‘Cept in the sky
Where a lonely little Blackbird’s
Lookin’ for a bluebird flyin’ high.

And goin’ by her coffin in the soft candlelight
Is Harlem, Harlem dressed in snowy white.
The heavens they is weepin’,
The streets a-runnin’ tears,
And a lonely Blackbirds hummin’
Is a buzzin’ in our ears . . . .
Harlem, Harlem all in white . . . .
A grave that’ll hide her outta sight,
And Jesus singin' in the night.
T

Although the dancing statue by Antonio Salemme was never created to stand over her grave, Florence was commemorated in art a number of times. The world knows of Paul Colin's iconic posters of Josephine Baker but this delightful portrayal of Florence Mills by Paul Colin when she was in Paris remained unidentified for 80 years until I recognized it in a traveling art exhibition this year (2008). 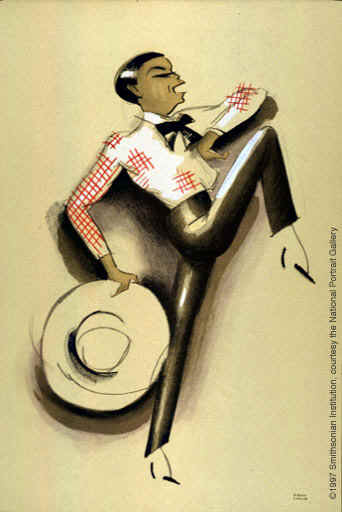 Here are some more items: 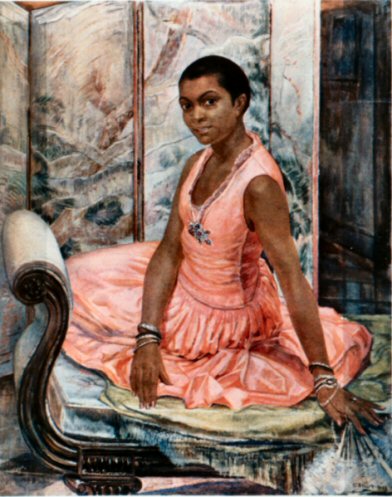 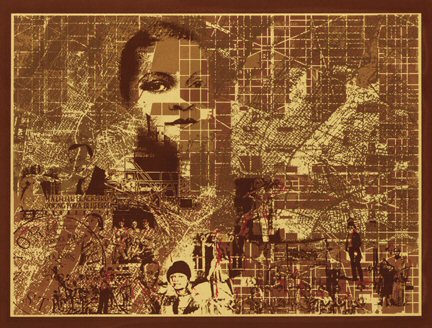 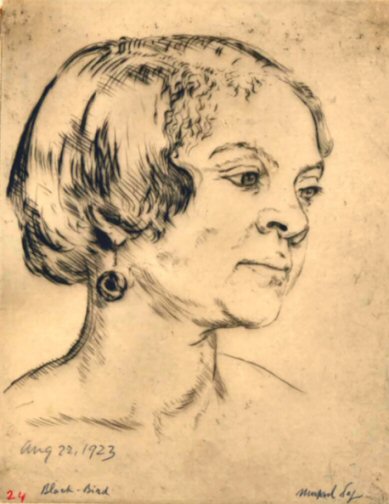 One of the interesting people who saw Florence in London in 1923 was Indian artist and philosopher Mukul Dey, who used dry-point etching technique to capture her in this work later publicly exhibited in London in 1927