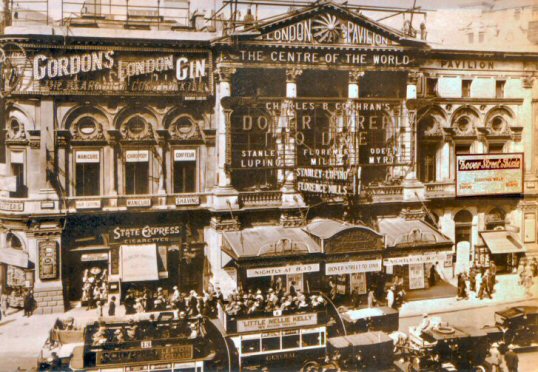 Although there was no permanent monument to Florence Mills, many buildings and places still have historic links to her.  The London Pavilion above (situated right on Piccadilly Circus), scene of Florence's triumphs in 1923 and 1926-27,  is now part of the London Trocadero.

For other buildings & places  linked to Florence click these bookmarks or scroll down:

Scene of Florence's 1924 triumph in Dixie to Broadway, the first black show to run  in a mainstream Broadway theatre in prime season. Rival shows like Shuffle Along, Runnin' Wild and Chocolate Dandies played in lesser theatres on the fringe of Broadway proper. In 2002 I had the pleasure of showing the Broadhurst to three of Florence's great-nieces (grand-daughters of Olivia) and telling the story of her success there (for wider angle picture see link above): 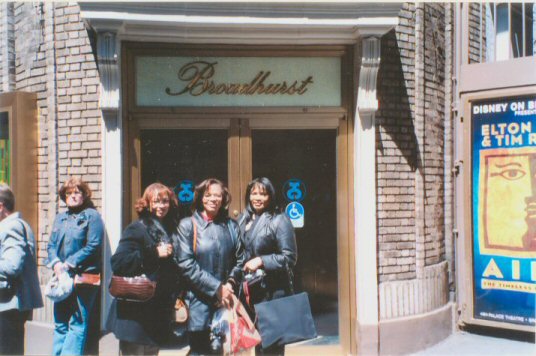 Vaudeville's  jewel in the crown - for the greatest entertainers, topping the bill at the Palace was the acme of  success.  Florence Mills was the first of her race to have that honor in June 1925: 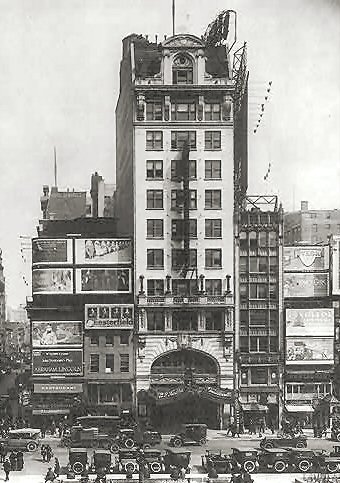 At the time of Florence's death the New York Evening Journal published a photo of her home at 133rd street but it was wrongly captioned as 135th Street. Due to this mix up, many years later the wrong house was designated as a national monument in the US National Parks "National Register of Historic Places". When I drew this to the attention of the National Parks they acknowledged the original mistake and in 2009, the designation has been withdrawn,  Here are the two buildings (fake on left, genuine on right) as they were in Florence's day: 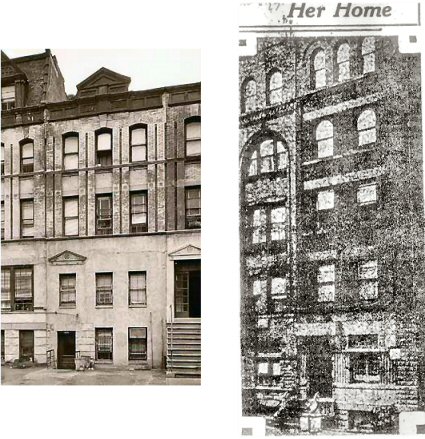 Unfortunately the genuine building cannot now be preserved as it was demolished with several others some years ago as part of  development for St Phillip's Senior Home, which has the same address as Florence's, 220 W. 133rd Street.  Perhaps it could one day be renamed Florence Mills House after its illustrious previous tenant.  Here is it's foyer entrance: 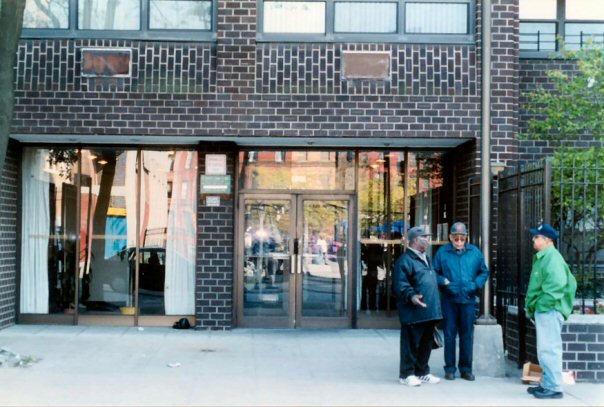 The extaordinary scenes of grief at Florence Mills' death reached an emotional  climax in the funeral at the African Methodist Episcopalian (AME) Church, fondly known as Mother Zion. the oldest black church in the U.S., founded in 1796, it was at one time a haven for slaves escaping on the underground railway. The current building was opened in September 1925. The interior (see below) is still unchanged from when Florence's funeral was held (for exterior see link above): 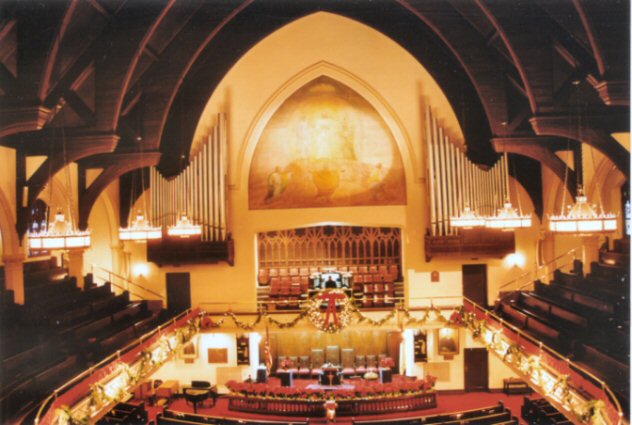 Known then as H. Adolph Howell Funeral Parlor, this was where Florence lay in state as tens of thousands of mourners came for a last glimpse of her in her gilded coffin, shown below. The little chapel is essentially unchanged today from when she lay there surrounded by flowers, as can be seen from the "then" and "now" pictures: 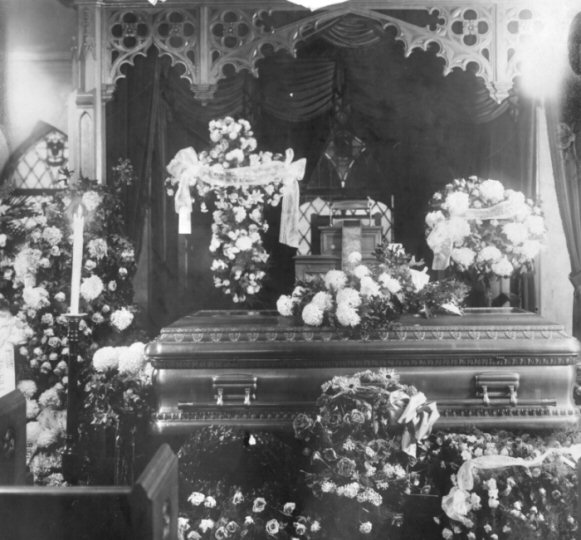 NOW (with thanks to John Joyce) 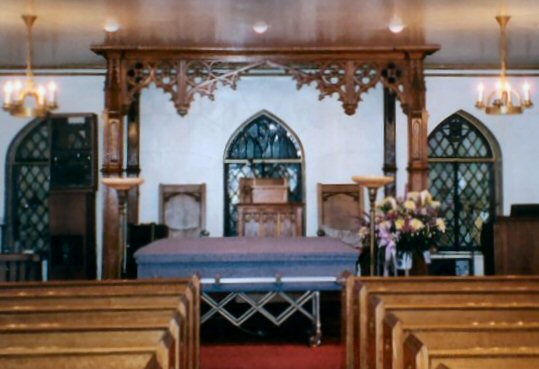 Florence rests in Woodlawn Cemetery (Arbutus Plot), along with many of her friends and contemporaries including Bricktop, Duke Ellington, Bert Williams, Nora Bayes, Birleanna Blanks, Irene Castle, Hall Johnson and many more great entertainers [scroll to the Notable people:Great Entertainers section to find Florence], especially many jazz greats.  Her simple grave is situated on a pleasant tree-shaded hill. Her adored mother, who died in 1931, shares her burial site, which is perpetually endowed. The planned statue of Florence dancing, by renowned sculptor Antonio Salemme, was never made. For those who are not intimidated by cemeteries, a visit to Woodlawn on a sunny afternoon to find the graves of Florence and other notables, is a pleasant way to spend a few hours (but be sure to pick up the map at the office else you may spend some time stumbling around tying to find the correct site, as I did first time. ) 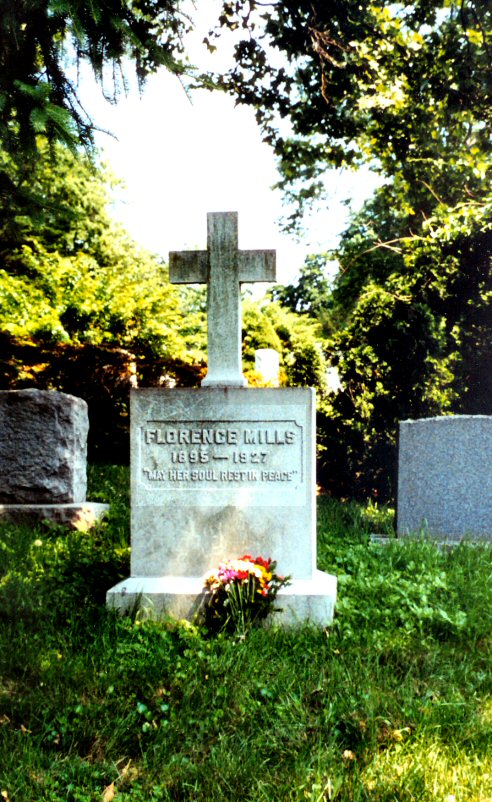 After Florence's death there was much debate about how best to commemorate her. The statue over her grave by Antonio Salemme was never made. Bill 'Bojangles' Robinson wanted a drinking fountain near the Dunbar Apartments. Numerous fund-raising events were held. English fan Lady Cook gave proceeds of her activities to the NAACP. The official memorial committee, chaired by Jesse Shipp and later Irvin C. Miller, wanted a home for distressed African American actors. They eventually managed to open such an association at 115 West 131st Street in 1929 (wrongly listed in my book as 113th St

). It flourished for a few years until the Depression swept it away, leaving no tangible memorial. Today the building still stands, headquarters for a Harlem branch of the New Testament Baptist Church - See Then and Now below: 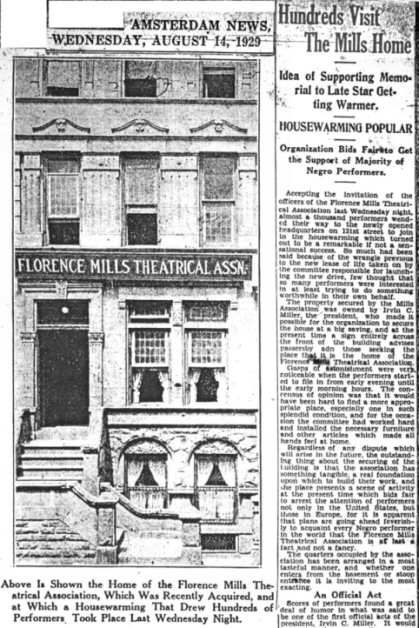 One of Florence Mills stepping stones to fame was when she spent six months touring on the Pantages circuit in 1919 as part of the Panama Trio girl singers. The Pantages circuit was the creation of Alexander Pantages, a vaudeville impresario of Greek birth who had a large string of theatres covering west and mid-west USA and Canada. Pantages had many fine theatres built by a first class architect, Marcus Priteca, and some of these, including ones Florence performed in, are still in use, including:

The original building of the downtown Los Angeles Pantages (534 S. Broadway), where Florence performed, is now part of a commercial complex but the Pantages name can still be discerned today over the entrance: 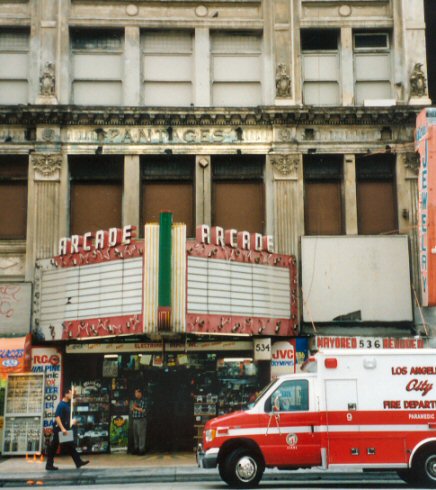 Although no monument was ever created for her, Florence did get a bricks and mortar memento when a fine apartment building on Edgecombe Avenue in Harlem was named after her. Her name can be seen over the entrance: 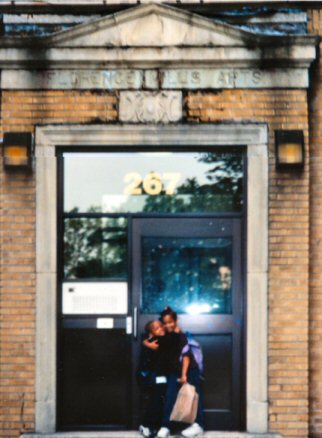 And now there is a Los Angeles Florence Mills Apartments:

In the 1930s, when Los Angeles' Central Avenue was at its swinging height, a popular theatre -cum-movie house was named after Florence. There it was possible to see live acts, as well as black western movies starring Herb Jeffries (the Bronze Buckaroo). Sometime in the 1940s it went into decline and served recently as a video store before becoming derelict but Florence's name could still be discerned on it over the years. Recent attempts to restore some of Central Avenue's glory will now see the Florence Mills Theatre redevoloped as part of an arts and cultural complex by Century Housing for the Dunbar Economic Development Corporation (now defunct).  We can  look forward to seeing the After picture in due course to match the Before one below (note words "Florence Mills Theatre" on gable end. [Sadly this did not happen due to the GFC, and the theatre was demolished in 2013: See link above ]
But the new apartments are a womderful replacement https://abc7.com/housing-california-los-angeles-veterans/6869460/ 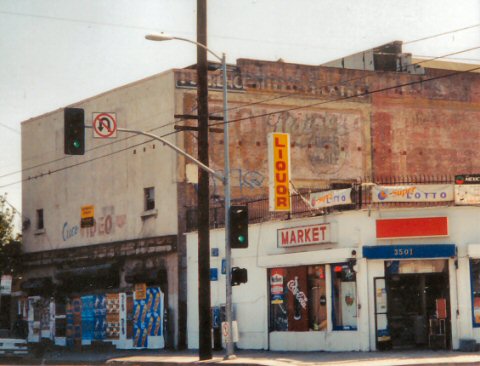